A student’s personal conduct contributes to his success in school and to a conducive learning environment for all. Students are therefore expected to be in their best of conduct by showing respect to teachers, members of staff, fellow students, school property and activities. This expectation is reflected in the following code of discipline:

Absence from Assessments (Tests and Examination)

An ACSian’s pride in the school is represented by his personal appearance. It is expected of all students always to be neat and proper in their appearance as a mark of respect for the school. 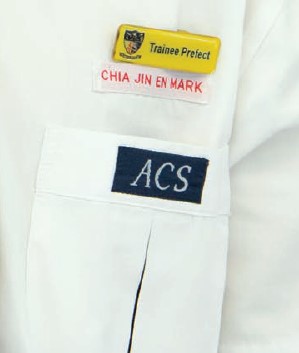 ^ refers to those that have similar functions as mobile phones.

The student must comply with the rules below; failure to do so might result in the removal of the student’s privilege to bring his mobile phone/smartwatch to school.

1. Only mobile phones/smartwatches that are registered with the school are allowed to be used within the school premises.

2. Registered mobile phone/smartwatch will be issued with a label by the school. The school has the right to prohibit the usage of any unregistered or unlabelled device.

3. The mobile phone/smartwatch must be switched off at all times and kept out of sight during all school activities (i.e lessons, chapel, recess, CCAs and excursions). No mobile phones/ smartwatches are allowed in the examination rooms.

4. The student must seek his teacher’s permission before using his mobile phone/smartwatch during school hours.

5. The student can only use his mobile phone/smartwatch solely for communicating with his parents / caretakers when allowed to during school hours, or after school hours.

6. The student is not allowed to use his mobile phone/smartwatch to take photos or video within the school premises. Gaming and surfing the internet are not allowed.

10. A change in mobile phone/smartwatch will require a new registration.

11. The school will not be responsible for any loss or damage of the student’s mobile phone/smartwatch.

Pupils may seek for early release from school only for the following reasons:

A Parent/Guardian must fill in the details and sign in the “Early Release From School” record book before the pupil can be released.

Early Release from School When Pupil Is Not Feeling Well

The pupil first seeks permission from his subject teacher in class. He will then be escorted to the General Office by the Monitor or by a fellow classmate assigned by the teacher. His parents will then be contacted. A pupil who is granted permission to leave school to seek medical attention is required to obtain a medical certificate dated on the day of his early release from school. The medical certificate is to be submitted to his Form Teacher when he returns to school.

Early Release from School by Special Request from Parents/ Guardian

Parents/Guardian must write to the Principal to ask for permission for the pupil to be released early from school. The school does not encourage medical appointments during school hours unless it is an emergency.